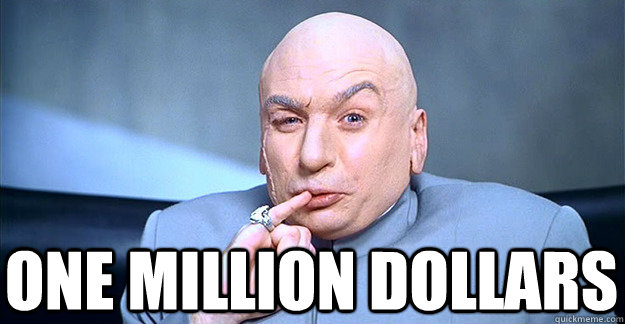 What does 1 Million Dollars look like?  And since we’re on the subject, how much exactly is $1 million dollars?

If you want to be earning a million dollars a year it looks like this:

This is what is know as doing the millionaire math.

Before you hit a target, you must do the math.

For any goal to be achievable, you must believe it’s possible as a realistic and doable goal. The way to do this is simply by doing the math.

It simplifies the objective.

You do the math to create possibility, then you can create strategy.  Wealth requires simple, basic math, and any wealthy person will tell you this.

Because getting to a million dollars is about numbers.  But that’s not all there is.  After all, you’re just one idea, one strategy, one tactic away from your next million dollars.

Doing the math is just one of the eight steps Grant Cardone lays out is in a very simple to understand language that will allow you to get started today in creating the money you deserve.  Let’s face it, your parents didn’t teach you how to get rich and the schools and colleges don’t even talk about it.

And here’s the bottom line with this, Grant Cardone wants to simplify the process of becoming a millionaire and, if you want, even super rich. This isn’t some pie in the sky, out of reach big claim. He knows it is attainable because he has used the information here and done it.