The Mandela Effect Meaning and Your Money

[READ How to Create Wealth Investing In Real Estate]

The Mandela Effect gets its name from Nelson Mandela.  When Mandela actually died 2013, it turned out that a whole bunch of people thought he was already dead.  Additionally, they also believed and “vividly” remembered hearing about his death.

A lot of people also belief there’s a peanut butter brand out there called Jiffy.  That’s a lube joint.  Jif is the peanut butter…  And Sinbad never did a movie in the 90s called Shazaam.  Promise.  You’re thinking of Shaq and Kazaam.  Close but not really.

Here’s where this starts to translate to your money…

One person get’s it wrong, then another accepts it as truth and then disseminates that and it spreads.  And speaking of The Dark Side, it’s Joseph Goebbels who get’s credit for saying, “If you tell a lie big enough and keep repeating it, people will eventually come to believe it. The lie can be maintained only for such time as the State can shield the people from the political, economic and/or military consequences of the lie. It thus becomes vitally important for the State to use all of its powers to repress dissent, for the truth is the mortal enemy of the lie, and thus by extension, the truth is the greatest enemy of the State.” 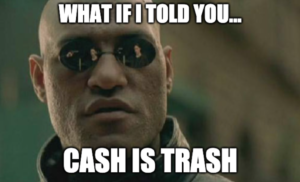 In the Strategy, Grant says this is the biggest Mandela Effect of all.  It has turned out that cash is actually garbage.  Grant Cardone will be the first person to tell you that cash is trash.  Can you believe that?

I know, it’s crazy right?  How long have you been told that cash is king?  How many times have you said those words with full certainty that they are true?  But let me ask you this question; if cash is king, how much actual thought have you put into this statement?  Why would that actually be true?  Do you remember somewhere along the line you who taught to do things like save your money for a rainy days and emergencies?

Why Cash Is Trash

When you look at the Mandela Effect meaning and your money and then you look at say the cost of a night out when you were a teenager compared to now.  For example, in 1977 when the first Star Wars movie came out, it cost $2.23 for a ticket.  The Rise of Skywalker tickets at my local theatre are going for $13 per person right now.

Inflation eats cash for breakfast, lunch and dinner.  In 1919, a nice men’s dress shirt was only a dollar.  What can you get for a dollar now?  Aside from junk food…

This is why saving money is useless.  “Personally,” Grant says, “I don’t save money; I only store it for a short period of time until I can invest it.”

[QUESTION:  Do you have your copy of The Millionaire Booklet?]

Grant goes on to say, “saving cash is like saving a legal pad, it’s worthless because money, like ANY paper is only good when it’s USED.”

[ACTION IDEA:  Make a list of the ways you use money every day.]

And saving your money in a bank doesn’t do anything for you at all.  It will take you 833 years to double your money at today’s bank rates.  So unless you’re Noah, probably not the best place to put your cheddar.  Literally, saving money in a bank account will cost you more money than you will ever make in interest.

This is why Grant says you should only temporarily store your cash, and then you need to invest the storage into the real king…  Cash Flow.

CASH FLOW IS KING:  Getting it straight from Uncle G

“The golden goose is only good as long as she lays eggs. If she doesn’t lay golden eggs you can kill her for the chicken, right?  Money needs to make babies, to multiply; otherwise, you might as well spend it as soon as possible.

The same is true with money.

Cash is NOT king; rather, cash flow is king—you’ve just been misled by the Mandela Effect!!!  Here’s what to do with your cash:

Back to me.  Standing water evaporates or putrefies.  Water, like cash, must flow.

Where’s your cash and how is it flowing?

Is more flowing out than in?  And how do you fix that as quickly as humanly possible?  The really great news about this part is that it is fixable and you don’t have to figure it all out by yourself.

When Grant says to invest in yourself to increase your income, he’s telling you need to put your money back into you.  You need to information and knowledge in order to grow and evolve from employee to sales professional to business person.

This is exactly why Cardone University exists.

Investing in your business is the next step to increasing income.  Once you become a business, you must get known and you must continue to scale upwards which is why Cardone Advertising exists and why we do these massive events like 10X Growth Con.  So you can network WHILE learning for those who already did it…  and did it really well might I add.

The Mandela Effect Meaning in Conclusion:

Hopefully you can see that “cash is king” is just another prime example of The Mandela Effect.  But, also, are you starting to see Grant’s big picture?  Can you see the impact he is looking to have on your financial well being?  The back of my first business card in 2011 reads the following:

This is happening on the highest level right now and we here at Cardone Training Technologies are honored and privileged to be a part of this complete circle.