In this quick segment, Grant Cardone is asked by Entrepreneur’s Jason Fell for the real deal on competition.  Is competition a good thing?  Is it even healthy?

Jason brings up Mark Cuban and that Mark doesn’t have time for competition.

Grant agrees and goes on to say that competition will only get you the same little problems.

“Competition is basically an effect.”  Grant says.  ” I know the concept.  If I’m a good competitor and you’re a good competitor, and if you run faster, then I’ll supposedly run faster but if you’re dependant upon somebody else running faster, doing more, creating more quality…

“If you’re dependant upon what somebody else does, you’re in trouble already.”

Who’s dominated?  Who’s at cause for their environment?

This is domination.  These are businesses that own the space and control it.

So how  does that apply to an entrepreneur just starting out?  That’s the real question.

“You don’t create anything great looking at what other people are doing.”

Grant tells Jason, people have to find their thing and dominate that space.   Grant then goes on to say that you don’t need a budget to dominate either.  Grant uses social media to dominate his space and the only thing that costs him is time.

Grant then goes into the final tip towards domination and getting your brand out there.  This final tip will require you to go somewhere that most aren’t willing to go and this is also the one thing that separates the average from the great.  What do you think it is?

If you need more on domination from Grant Cardone, take a look at his New York Times Best Seller, If You’re Not First You’re Last.  Grant went on to follow that book up with The 10X Rule.  These two books together deliver a one-two punch of success strategies to dominate your market and beat your competition.  For the busy body, we created the Grant On The Go PLUS package where you get the mp3’s of all four of Grant’s books with The Rules Of Success and 100 Ways To Stay Motivated.  We also have a DVD Domination that we include as our gift to you. 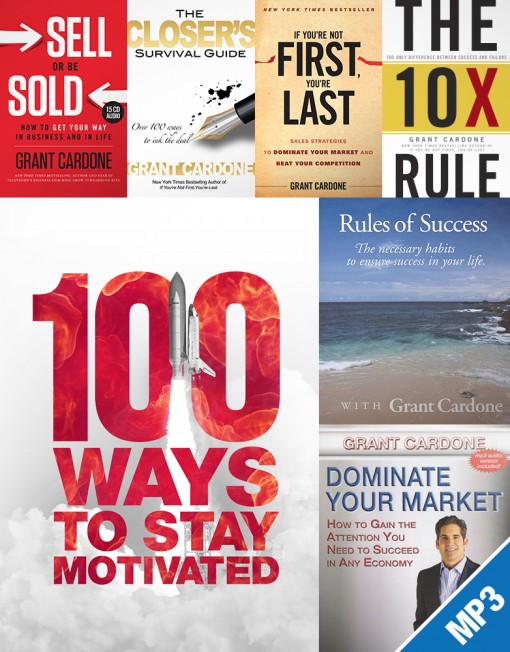 Screw the competition with the Grant On The Go Package!