Grant Cardone urges people to get out of the middle class because it is a myth perpetuated by outdated thinking, politicians and mass media.

Grant starts off the first Cardone Zone episode to air on Grant Cardone TV by explaining why the middle class is a failing formula. He explains that the old way of doing things isn’t viable and gives the example of traditional media. He explains the traditional networks ABC, NBC, CBS are losing viewers. More and more people want to control where and when they get their information. This is why Hulu and Netflix have gained such popularity and on-demand style viewing inspired Grant to launch WitNation.com a digital network for 24/7 access to business programming.

Grant goes on to say that the middle class was based upon an era where there was expansion and industrialization in America. The middle class idea worked for a certain population of people at a specific time in history. Things have since changed and people refuse to adjust how they work and earn. They are applying old work styles such as a 40 hour workweek to a completely different marketplace. This is why they are failing. The new economy calls for people to strive for freedom and it’s not achieved without work!

Grant’s advice is to look at your primary employment and see if there are opportunities there to earn more income. Then look to earn more with the remaining time you have. Grant sets the target for $125,000 then tells people to save 40% of that until they are ready and knowledgeable about what to invest it in.

Key Facts About The Middle Class

1. You need lots of money, just getting by is a miserable existence.
2. Forty-hour weeks make slaves, you’ll work double that for freedom.
3. Life isn’t fair and business, less so.
4. Your success will not depend on your education but your actions.
5. The world doesn’t care if you succeed or fail.
6. You’re owed nothing, deserve nothing, entitled to nothing. 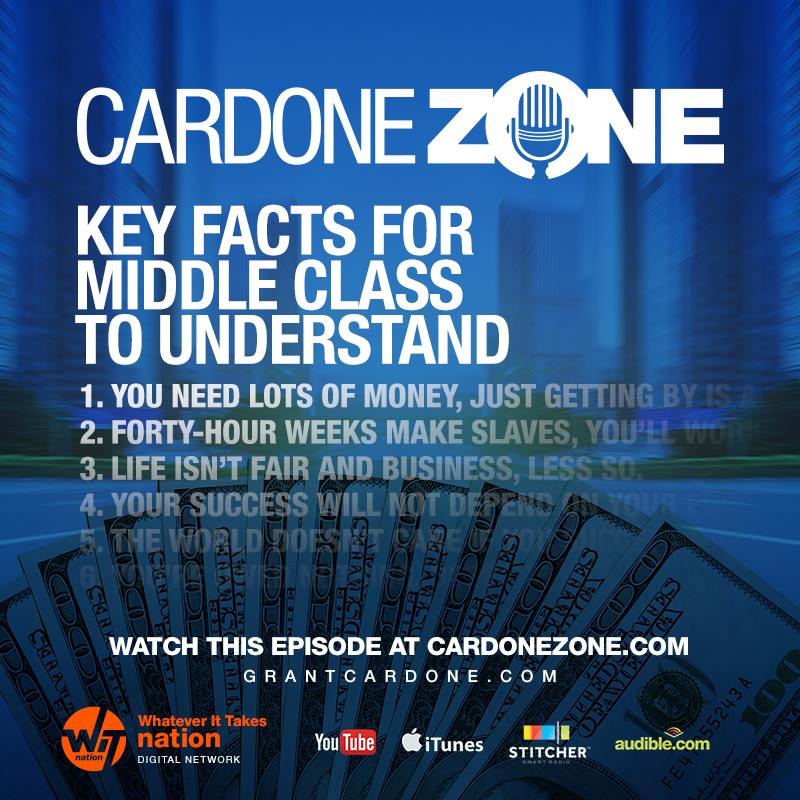